After striking a deal with the US government to prevent bruising tariffs, Mexico has tightened border controls. As a result, citizens of Honduras, Guatemala and El Salvador heading to America are taking more dangerous routes to cross into the country, to avoid being detained.

An hour away from Mexico City, Tultitlan is a crossroads for freight trains and popular gathering point for migrants. But their numbers have dropped since the government became more stringent in enforcing immigration policies.

Jorge Luis Berrios has encountered eight checkpoints on his way through four Mexican states. After showing his documents, officials let him pass

“Mexican authorities have told us to always carry our IDs. If we don’t, they’ll deport us. We have to avoid any sort of trouble while we’re in Mexico, ” Berrios said.”

Officials say that since reaching an agreement with the US to control the influx of migrants through Mexico, deportations have risen 33-percent(

“As Mexico cracks down on Central Americans trying to get to the US, Mexican military have begun targeting migrants who have hitched rides aboard the train known as The Beast.”

As security measures grow more stringent, migrants will find the journey to the US more difficult, Nevertheless, many still believe it’s worth the risk. 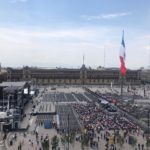 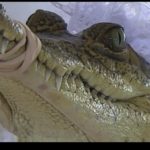