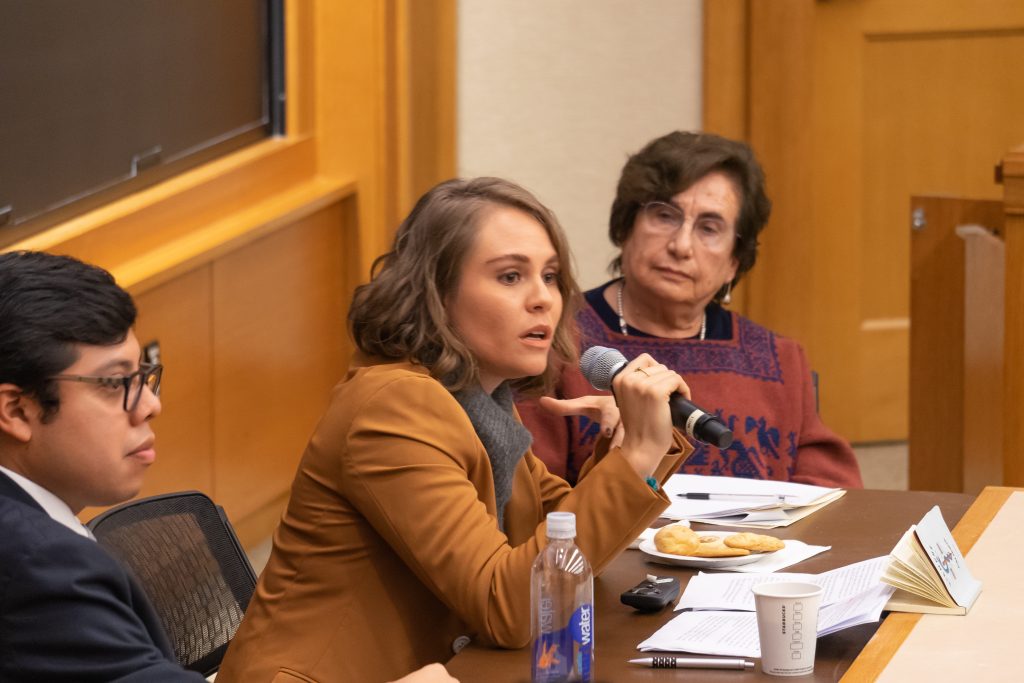 I appreciate and am honored by the opportunity to be at the Latinx Law Conference. 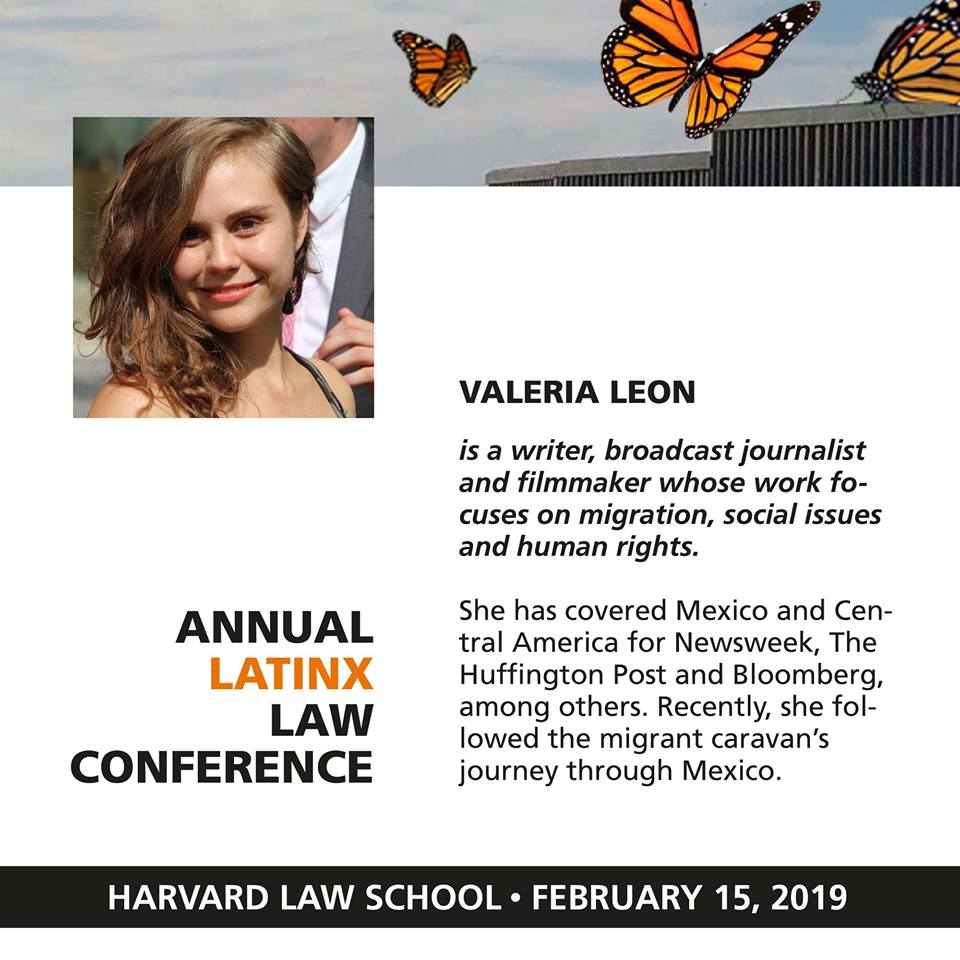 As a Mexican journalist, who’s covered migration issues for over 10 years, the recent phenomenon of Central American refugees traveling in caravans has proved particularly interesting, if, at times, heartbreaking.

I covered the first caravan that arrived in Tijuana last April. This is a picture I took at the campsite outside the Chaparral checkpoint, which is the busiest border crossing point in the world. Here, the migrants had to wait for two weeks while their asylum claims were processed in the United States.

I was surprised to see only women and children camping outside the checkpoint. I asked them about the absence of men, and they said most of their fathers had disappeared and some killed. Most of the children had been abandoned by their fathers at a very young age. Some women explained to me that it was easier to cross and then to seek asylum if you are a single mother with kids, than if you travel with men. That is why young women decided to do the trip alone.

I spoke with a couple of kids and asked them about their dads, both answered that the the gangs have killed them. One of the children I spoke to, 8-year-old Christian, answered me calmly, as if murdered parents was nothing out of the ordinary. And, unfortunately, it isn’t.

Since a decade ago, Honduras bears the highest homicide rate between the Latin American countries. The worst year was 2011 with 7,000 murders reported.

To understand violence in Honduras, you have to understand a negative cycle. Organized criminal groups like gangs and drug traffickers pay off police, prosecutors, and judges to get away with their crimes. This corrupts the criminal justice system. Without a functioning justice system, impunity runs rampant for criminals and murderers: they are rarely held accountable for their actions. This of course, leads to more violence and crime.

Gangs play a key role in the high rates of violence in the country.The most famous one, the gang known as Mara Salvatrucha began of Los Angeles during 80s. It was formed by immigrants who had fled El Salvador’s long and brutal civil war. 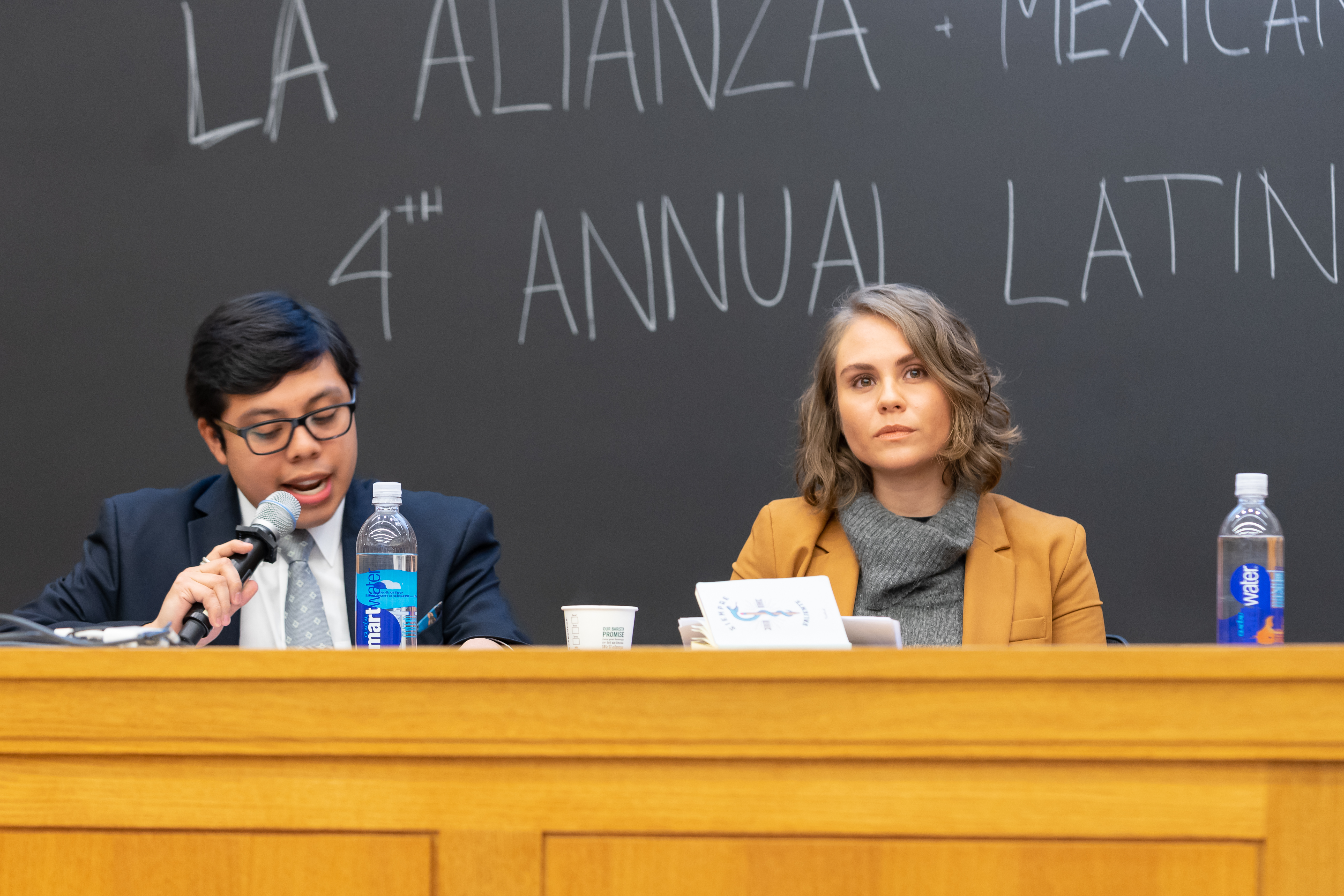 More than 30 years later, gangs control almost everything in Honduras. While I was talking to parents who traveled with their babies in the caravan, they told me that by the time their kids turn 13 the gangs are already waiting for them. If you don’t hand your son over to them they will kill you and take him anyway.

San Pedro Sula has become famous for being one of the most violent cities in the world, making migration and deportation a matter of life and death.

When word spreads that a caravan is forming, it doesn’t take much convincing for people to join.
Even now, as Donald Trump has sent troops to the U.S.-Mexico border, people in Honduras talk about forming new caravans every day, ready to walk thousands of miles for a chance, not even for a better life, but just to live at all. So they are not looking for prosperity or more income. They are trying to survive. Traveling by caravan is the reaction to such a violent and risky journey from their home countries to the US-Mexico border. The risk has grown greater since the drug war turned more violent in the past decade in Mexico. The gangs, known as sicarios, took control of the rauts and forced migrants to work for them by kidnapping them.

They’re easy prey because most migrants will have a few thousand dollars to pay the smugglers- best known in Mexico as “coyotes” or “polleros”. Also they’re excellent for transporting drugs as able-bodied men.

The life expectancy of a migrant drops to just five years once he has been recruited by the criminal groups. But the risk of being captured on the route is dramatically decreased if they stick to the caravans.
In less than a year, three migrant caravans left Honduras with thousands of refugees traveling together. The first one, with three thousand migrants. The second one left from Honduras in October, but this one was bigger, more than 7,000 Central Americans, and more migrants joined the journey as they made their way through Mexico. This caravan was the largest of its kind and drew even more attention from the international press. 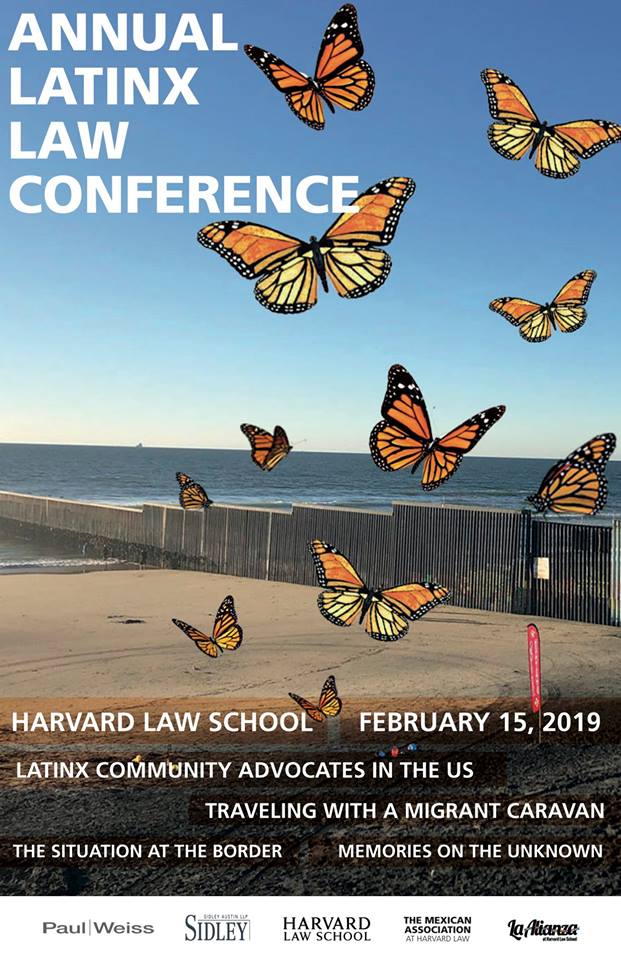 I spoke with at least 30 migrants traveling in the Caravan, and spent three days with them walking through the states of Oaxaca and Chiapas. When I was back in Mexico City everyone I ran into asked if someone was secretly sponsoring the caravan. They just couldn’t believe that it had been formed by refugees fleeing unspeakable violence. In these conditions, no one needs to convince them, pay them, or promise them anything.

But as the Central American caravan was making headlines, people started speculating that mysterious political forces were behind this mass exodus of people from Honduras. Trump ordered the Mexican Government, to stop the migrant caravan from reaching the border. But his threats didn’t have any real effect.

The government let the caravan pass through without any resistance, or at least very little. 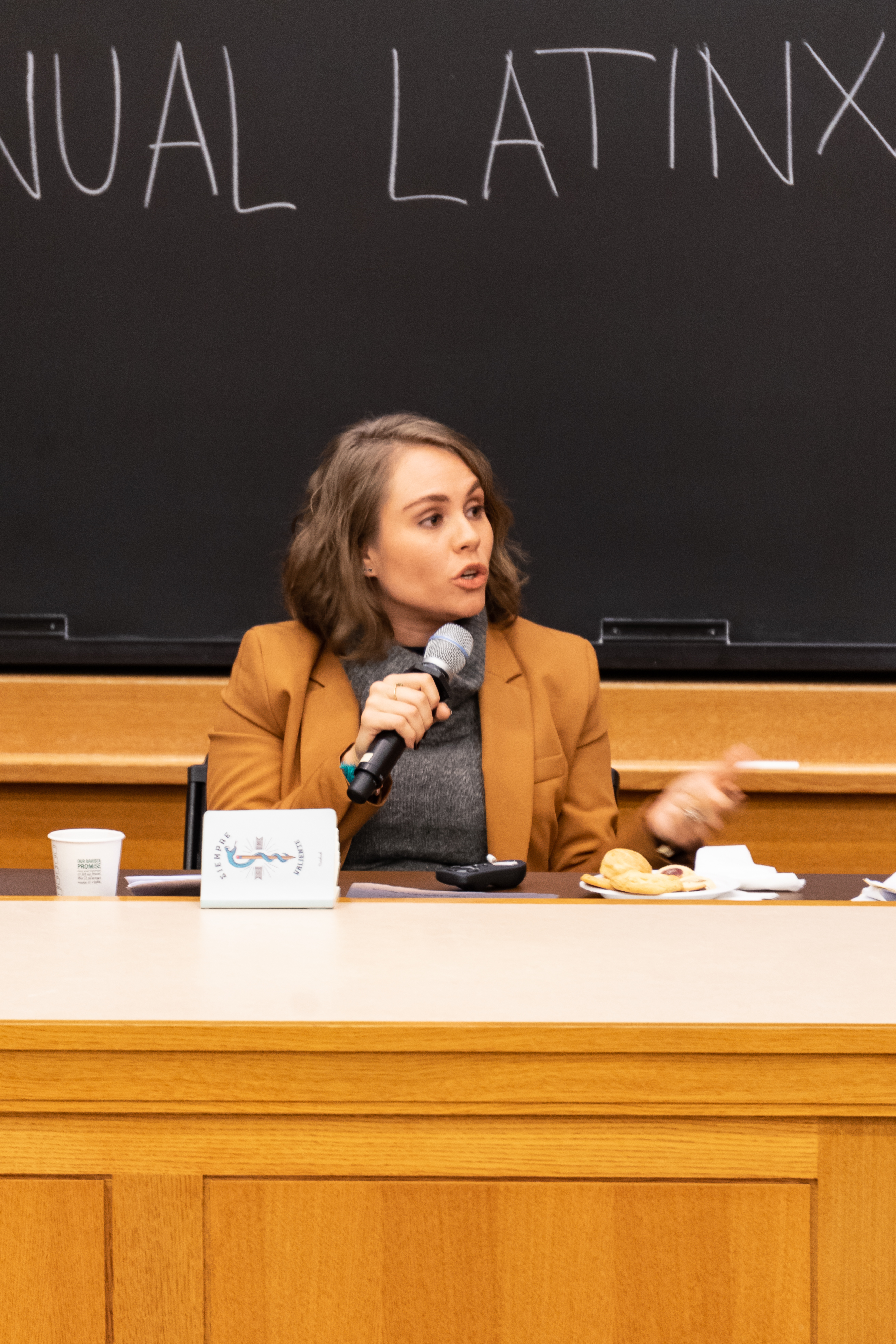 In the southern state of Chiapas, the governor offered free rides on buses to speed them onward to the neighboring state of Oaxaca .
When they finally reached the capital city, they stayed for a week at one of the largest sports stadiums in Mexico City. There, the government and non-profit organizations offered health services and food for free. Most of the Central American migrants were surprised by the good treatment they received. But everything changed when they arrived in Tijuana. The local residents held a protest against the presence of the caravan in the streets of this border city.

The movement of the caravan took place in the midst of very tense political situations in the US and Mexico.

In Mexico, the transfer of power from president Enrique Pena Nieto to Lopez Obrador has been met with endless controversy in the media. While the US was focused on its midterm elections. I heard a lot of people, mainly Americans, saying that the immigrants couldn’t have chosen a worse moment to come. Once the mid-term election came to its end the media lost interested. But not for long. An image caused surprise and outrage: The US Border Patrol firing tear gas that spread nearly a square kilometer through a crowd of hundreds of asylum seekers, including children.
This event took place at the US-Mexico border in Tijuana, as groups of desperate people attempted to cross the border en masse. 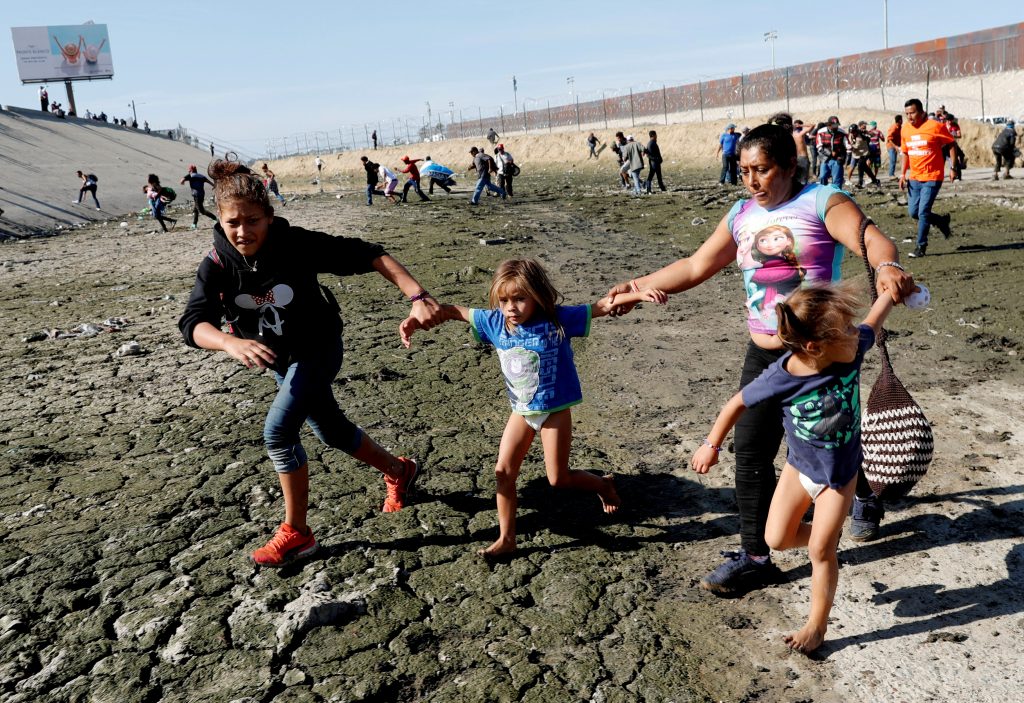 The President of the United States ordered tougher strategies for dealing with the humanitarian crisis. On the Mexican side the situation was far from welcoming. Tijuana was the only place where the migrants faced discrimination and were rejected. This didn’t happen in other states, and we understood why-….. in order to remove the illegal immigrants from their communities, Other Mexican cities merely needed to arrange trucks and buses to get them North and Out of their states.

The Mexican authorities were pretty worried about this situation, they didn’t have the facilities to receive that many people.
Eight thousand refugees and migrants poured into the city in less than two weeks.

My visit to the shelter where they were camped out put me in a state of shock. The conditions there were unsanity and awful. And the most depressing issue was looking at all the sick children. The Mexican Government didn’t have a plan to deal with this situation and the local authorities in Tijuana were quickly running out of resources to deal with this crisis. The U.S. government only reinforced the border wall with razor wire on the top of the fence.
There was barely any room left in the camp. I saw people sick and vomiting, open air showers and everyone sleeping on the ground.  The problem is – this situation isn’t temporary. There’s no long term plan for dealing with the thousands of people already there – and there are many more still on the way. 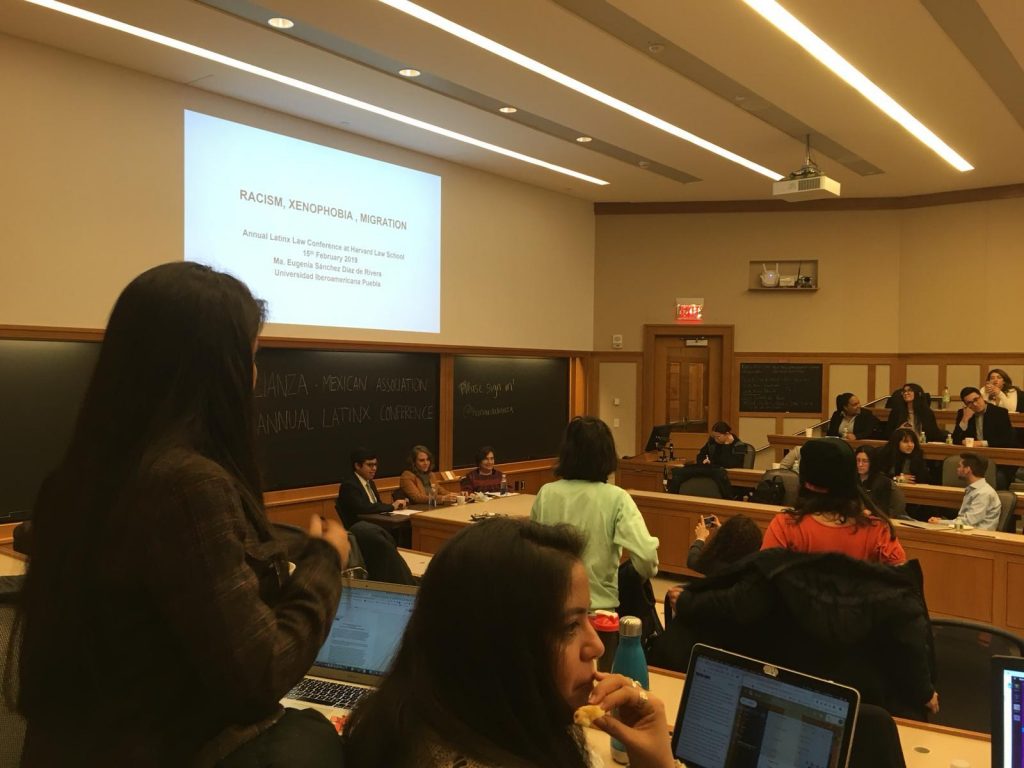 The new Mexican policy of welcoming migrants with visas mark a stark contrast from the past — and could lead to an increase in migration and tensions with the Trump administration. The visas are part of a new policy by López Obrador’s government. Mexico’s President has decried the sometimes-brutal treatment of Central American migrants by Mexican security forces in the past.

Since Mexican authorities started accepting applications for the new visas, more than 10,000 migrants have applied — including 8,000 adults and 2000 children or adolescents, according to figures.

The latest caravan set out from Honduras on Jan. 15 and initially totaled only about 2,000 people. But other migrants continued to join the human flow as it began to reach the Mexican border and its members were welcomed with the chance to apply for humanitarian visas.

I visited the shelter in Mexico City where they spent three nights before heading to the next state, until they reached the border town of Piedras Negras in the Mexican state of Coahuila.
At the shelter I met young Michelle Ramirez traveling with her 9-month- old baby and her husband, who was a soldier in Honduras.

Here’s the last report I did about them.

There’s no doubt that more and more caravans will come from Central America fleeing violence… but the question is: “How are the governments of the U.S. and Mexico going to deal with this crisis” In Mexico, the President, in a change of strategy, cancelled the visa program after only two weeks in existence.

The truth is that they felt overwhelmed by so many people coming into the country. Part of his he new strategy includes a promise to invest in Central America in order to create jobs and reduce migration, but to date, hasn’t been fulfilled.

On the other side of the border, U.S. President, Donald Trump launched a new migration policy called “Remain in Mexico” while the asylum claims are being processed.
In his State of the Union speech he said he had ordered another 3,700 troops to the southern border to help stop migrant caravans from entering the United States.

I hope this will help you to consider other perspectives of this ongoing issue. 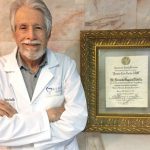 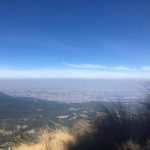